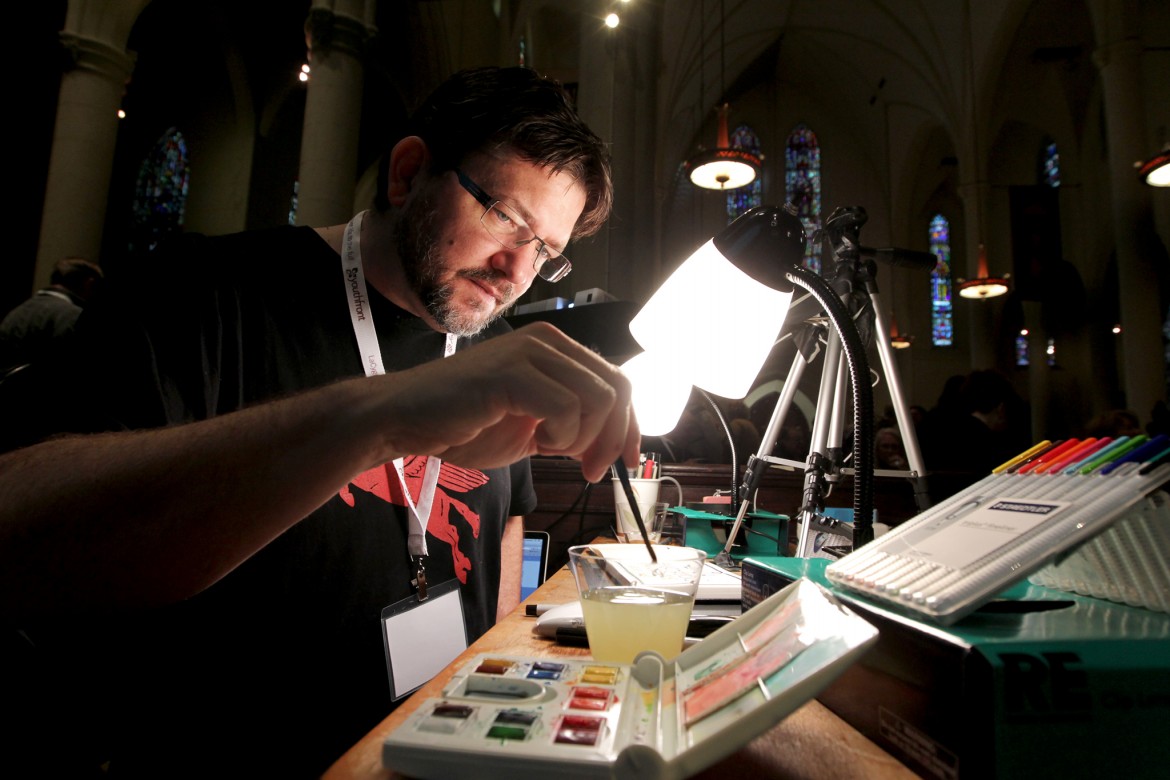 Photo by Courtney Perry
NOTE: Here is a Patheos interview with me from May 16, 2013 by Deborah Arca

Yesterday I interviewed Patheos blogger and acquisitions editor Tony Jones about the new adult faith formation video resource called animate.Faith from Sparkhouse. One of the sparkling gems of animate is the captivating artwork that runs throughout the series, from the video sessions to the facilitator guide, to the elaborately illustrated personal journals.

Behind the ornate graphics of Animate is San Antonio-based illustrator Paul Soupiset. I first “met” Soupiset  at the Emergence Christianity 2013 Conference earlier this year in Memphis. He and his art table full of inks and pens and pencils were set up off to the side of the stage while a video screen projected his real-time illustrations of the talks as they were going on throughout the weekend. It was a fascinating and extremely creative process to observe; he indeed “animated” the speakers’ words and ideas in stunning sketches, providing us, the listeners and watchers, with another window “in” to the conversation. The added visual element added a refreshing and exciting dimension to the conference.

I talked with Paul this week about his creative process and how he came to work with animate.

How did you get involved with animate?

When Toolbox Studios was wrapping up the illustration and design for re:form, which is Sparkhouse’s wildly successful youth confirmation curriculum, they approached us about bringing the same kind of illustration and design to bear on the adult faith formation market. We jumped at the chance and got to breathe some creativity into a stagnant category — adult sunday school — while working collaboratively with a bunch of friends from a lot of different faith-traditions.

How do you describe your art?

The illustration style I use in Animate is similar to the style I use in my own personal art: a lot of simple pen-and-ink and pencil linework that ranges from architectural to cartoonish to almost infographic. Some of the drawings are ornate, informed by Byzantine iconography and Celtic knot work, but then others are simple stick-figures that quickly communicate the idea at hand. I was given a lot of freedom to just pour myself onto the page.

What was your inspiration for the illustrations that surround this new series?

I’m inspired by the speakers themselves, and the subject matter; I start with their own manuscripts, but before I start drawing, I will have seen the rough cuts of each video. Tony, Carla and I hold creative briefings before each session, before I open my sketchbook, and so their suggestions have been immensely helpful. Many of the metaphors I used came straight from those conversations. Then it’s off to the drawing board.

What is your creative process … how do your ideas go from your head to the paper?

I’m a big believer in working one’s ideas out on paper. I start with a printout of the video script in one hand and a red pen in the other, and I’ll make little notes in the margins: a portrait of this character needs to go here, a metaphor for this theological play needs to go over there. Maybe a visual pun goes here, or a pop culture reference there. Then I’ll collect any reference material I need, maybe a photo of the speaker or an icon to see what some saint purportedly looked like. Once I’m ready to draw, if I’m in the studio, I’ll use bristol board,  pigment liner pens, and artist pencils to  start working out the drawings. If I’m out drawing somewhere, I’ll draw in my moleskine journals. It all gets scanned at a really high resolution for use in the videos and journals. If it’s for a video, I create the art in pieces, so that Kyle, the project’s director and animator, will have layered pieces he can use on screen.

How long did it take you to create all the illustrations for animate.Faith?

A volume of Animate takes a long time to illustrate—hundreds of hours to draw the journal and the video art, and to make occasional revisions. When an Animate series is in house I set aside time each day here at Toolbox to draw, more or less uninterrupted. My part of the process takes several hours a day, five days a week, for almost half a year, but that includes illustration, the journal design, and working with Kyle to art direct the animations. Kyle’s process runs parallel with mine, so I can just walk down the hall and check out the animations in progress on screen if I need to. It’s an enjoyable collaboration.

Click to see the Patheos interview in its context.